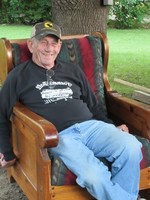 Royal was born in Detroit, Michigan on March 3, 1940, son of the late Royal and Grace (Neiding) Kronberg Sr. Royal was united in marriage to the love of his life, Peggy Green, and their union was blessed with four beautiful children of whom they loved and cherished. Royal was a longtime member of the St. Clair Shores Moose Lodge Post #1837 and the Harrison Township Fraternal Order of Eagles. His greatest joy was camping with his family and the great outdoors. He was an avid Tigers and NASCAR fan. Royal had a great sense of humor and was a great provider for his family. He will be deeply missed and although we grieve his passing, we know that he is once together with his beautiful wife that he missed so dearly.

A memorial gathering will be held on Thursday, January 18, 2018 at the Faulmann & Walsh Golden Rule Funeral Home, 32814 Utica Rd., Fraser, Michigan 48026 from 4pm till time of memorial service at 7pm. Share memories with the family at faulmannwalsh.com

To send flowers to the family or plant a tree in memory of Royal G. Kronberg, please visit our Heartfelt Sympathies Store.