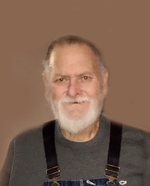 John Edward Frantzen Sr., commonly known to most as Eddie, a longtime resident of Sterling Heights, passed away peacefully on August 28, 2019. He was 71 years old.

Eddie was born on September 28, 1947 in Grosse Pointe Farms, Michigan to John M. and Constance (nee Gotwald) Frantzen. He met and married his beloved wife Delores (after an unforgettable first date) on June 5, 1982. Together, they were blessed with four wonderful children, whom Eddie always loved and cherished. He worked for many years as a toolmaker for General Motors before enjoying his retirement. Outside of his work, he enjoyed working on cars and going to car shows, watching television and Old Western's and especially cherished time spent with his family. Eddie's deep faith brought him strength and courage during his illness, and was comforted by the love he felt from his church family. He also had an unforgettable sense of humor and was always joking with those around him. Eddie was a truly courageous man who would let nothing stop him, even into the final days of his life. His smile and kindness will truly be missed by all who knew him, but memories of him will continue on in all who loved him.