To share your memory on the wall of Eric Schutz, sign in using one of the following options:

Provide comfort for the family of Eric Schutz with a meaningful gesture of sympathy.

Print
Eric Arthur Schutz, a lifelong resident of Fraser, passed away on Saturday, August 31, 2019. He was 52 years old.

Eric was born on February 10, 1967 in Detroit, Michigan to Erich H. and Valerie M. (nee Cantin) Schutz. He proudly served i... Read More
Eric Arthur Schutz, a lifelong resident of Fraser, passed away on Saturday, August 31, 2019. He was 52 years old.

Eric was born on February 10, 1967 in Detroit, Michigan to Erich H. and Valerie M. (nee Cantin) Schutz. He proudly served in the United States Army from 1985 to 1988 and lived his life as an honorable patriot. During his time in the Army, Eric worked as a Military Police Officer, and received several medals and ribbons in honor of his service and dedication to our Country. After his time in the U.S. Army, Eric worked as a security police officer for St. John Hospital in Detroit, Selfridge Air National Guard Base, and the United States Coast Guard. Outside of work, Eric enjoyed reading, especially Stephen King novels. He was well versed on political issues and wasn't afraid to share his thoughts and opinions. He loved watching football with friends and family and was a devoted Detroit Lions fan. He also was a proud member of the NRA. His favorite band of all time was "The Who" and he saw them numerous times in concert. Eric also had a great passion for antique automobiles, specifically muscle cars and late generation “big cars”, of which his favorite was the 61’ to 65’ Lincoln Continental. Eric was also an avid sportsman who enjoyed collecting and practicing with firearms. For those that knew Eric, all can attest to his compassion and care in helping others, his outgoing and friendly demeanor, and his joy in sharing his interests with others. Above all else, Eric was a loving and caring Father, Son, Brother, Uncle and Friend who will be deeply missed by all who knew and loved him.

To send flowers to the family or plant a tree in memory of Eric Arthur Schutz, please visit our Heartfelt Sympathies Store.

We encourage you to share your most beloved memories of Eric here, so that the family and other loved ones can always see it. You can upload cherished photographs, or share your favorite stories, and can even comment on those shared by others.

The Bunce family, Michelle Bracken, and others have sent flowers to the family of Eric Arthur Schutz.
Show you care by sending flowers

Posted Sep 16, 2019 at 01:04pm
Dear Corrine and family
I am so sorry to hear Eric has passed away. I didn't get to know Eric being I was one of the older cousins. He
looked his happiest with his children. Many beautiful picture of him growing up with you and later as a father
and husband. I didn't remember him serving in the armed forces so we can thank him for his service to our country.
He is in a better place with his mom. Rest in peace, Eric.
Margie Brisson

The Bunce family purchased flowers for the family of Eric Schutz. Send Flowers

Posted Sep 05, 2019 at 09:59pm
Wishing you peace to bring comfort, courage to face the days ahead and loving memories to forever hold in your hearts.

Posted Sep 05, 2019 at 09:49am
Please accept our most heartfelt sympathies for your loss... Our thoughts are with you and your family during this difficult time.

Flowers were purchased for the family of Eric Schutz. Send Flowers

Posted Sep 04, 2019 at 05:45pm
Eric use to love to dress up as “Freddie Kruger’@ Halloween and scare the heck out of everyone.
Comment Share
Share via: 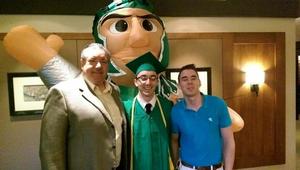