To share your memory on the wall of Willard Engelhardt, sign in using one of the following options:

Provide comfort for the family of Willard Engelhardt with a meaningful gesture of sympathy.

Print
Willard Paul Engelhardt, former longtime resident of St. Clair Shores, died surrounded by the love of his family on October 24, 2019. He was 89 years of age.

Willard was born in Sebewaing, Michigan on February 16, 1930, one of eight ch... Read More
Willard Paul Engelhardt, former longtime resident of St. Clair Shores, died surrounded by the love of his family on October 24, 2019. He was 89 years of age.

Willard was born in Sebewaing, Michigan on February 16, 1930, one of eight children of Carl and Dora (Dubs) Engelhardt. He served our country honorably in the U.S. Air Force during the Korean War. Willard was united in marriage to his beautiful wife, Ardie Fay Kieschnick, on August 11, 1951 in Redeemer Lutheran Church of Lubbock, Texas. Once he was discharged from the Air Force, the couple made their home in St. Clair Shores, Michigan and was blessed with four beautiful children of whom they loved and cherished. Willard began a career as a Master Mechanic and retired at the age of 64 from L & L Products of Romeo after many years of dedicated service. After his retirement, the couple headed to God's country in Chase, Michigan and nestled around their 80 acre wooded property. Willard was his happiest when he could be outside enjoying all God's creation. He enjoyed hunting, fishing and tending to his garden. Willard was known for his creative hands, that was always there to give and could fix anything. You could often find him in his pole barn working away on his project of the day or a tractor that needed to be fixed. Above all, he was a God loving, hardworking, family man who always stayed focused on what was important in life; God and family. He led by example with purpose and love. He will be greatly missed and his light will continue to glow in our hearts forever.

Visitation will be held at Faulmann & Walsh Golden Rule Funeral Home, 32814 Utica Road, Fraser, Monday from 4pm - 8pm and Tuesday 10am until the time of funeral at 11am with Deacon James Schurig officiating. In lieu of flowers, memorial contributions may be addressed to the USO in his honor. Share memories at faulmannwalsh.com
Read Less

We encourage you to share your most beloved memories of Willard here, so that the family and other loved ones can always see it. You can upload cherished photographs, or share your favorite stories, and can even comment on those shared by others.

Love Derek & Kyle, Lindsey, Katie, Michelle & Tim Smith, and others have sent flowers to the family of Willard P. Engelhardt.
Show you care by sending flowers

Posted Oct 28, 2019 at 12:35pm
Please accept our most heartfelt sympathies for your loss... Our thoughts are with you and your family during this difficult time.

Flowers were purchased for the family of Willard Engelhardt. Send Flowers

Posted Oct 26, 2019 at 05:50pm
How many do you want.....lots of them.
When I was a young teenager I used to baby sit for Dale, Marie and Doug. Melinda wasn’t around yet. I’d let the kids stay up for awhile then put them to bed. Aunt Ardie would always let me have pop or candy or whatever after they went to bed. Then on Sunday morning Uncle Willard, Aunt Ardie and us kids would all go to Church. Always enjoyed going there.

Went up to your Dad’s trailer in Chase before he built the house there. Was a young teenager then, too. One time I sprayed Dale with the hose while we were washing something and Uncle Willard chewed me a new one because it was cold out. “Don’t do that....you want Dale to catch a cold and get sick??? Oops, sorry, Dale.

Then there was the time I went up to the property with Uncle Willard and Uncle Ray in that old green SUV that Uncle Willard had. It was snowing to beat heck and we got stuck on the road. Uncle Willard drove and Uncle Ray and I tried to push, but the SUV decided to slide toward the ditch....I don’t remember how we got it out.....LOL

Always enjoyed seeing Uncle Willard at the Sugar Festival for years, especially when Aunt Ivadel lived on Henry St. across from the park. We’d all eat Chicken dinners together.

Finally, Uncle Willard used to tease me to no end. I’m sure I’m not the only one, but, it didn’t bother me and we always got along great! It was great when he went “up north” to his property and would ask me to go along!

Posted Oct 25, 2019 at 02:59pm
Please accept our most heartfelt sympathies for your loss... Our thoughts are with you and your family during this difficult time. 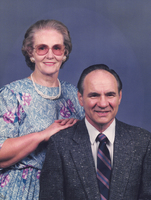