To share your memory on the wall of Robert Harper, sign in using one of the following options:

Provide comfort for the family of Robert Harper with a meaningful gesture of sympathy.

Print
Robert R. Harper, a longtime former resident of Fraser, passed away peacefully on November 11, 2019. He was 93 years old.

Robert was born on May 22, 1926 in Detroit to Ray and Ella (nee Moreau) Harper. After he graduated high school, Rob... Read More
Robert R. Harper, a longtime former resident of Fraser, passed away peacefully on November 11, 2019. He was 93 years old.

Robert was born on May 22, 1926 in Detroit to Ray and Ella (nee Moreau) Harper. After he graduated high school, Robert enlisted in the Army Air Corps and served his country honorably during the Second World War and was stationed in Germany. When he returned home, he married the love of his life , Rita on April 10, 1947 in Detroit. The couple made their first home in Detroit before moving to Fraser in 1958 to raise their family. Robert designed and built his cottage on Thunder Bay in Alpena by himself, where many family vacations were spent. He worked for many years in substation maintenance for Detroit Edison, retiring in 1982. Outside of his work, Robert was a true family man and was always helping his neighbors. From coaching his son's hockey team and daughter's softball team to volunteering for Meals on Wheels, and regularly donated blood for many years. Robert enjoyed staying active in his retirement, whether traveling with his wife to England to see his ancestral home and other countries in Europe or to the Caribbean or Hawaii; he was also known to roller blade ten miles at age 70. He was also an avid reader and especially enjoyed John Grisham's "The Firm" and Mario Puzo's "The Godfather". Throughout his life, Robert touched countless lives through his generous acts. He will be deeply missed by all who knew and loved him. 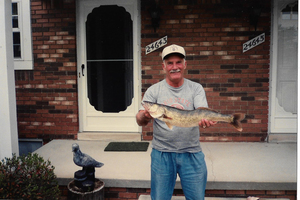