To share your memory on the wall of Kathleen Fisette, sign in using one of the following options:

Print
Kathleen Fisette, a longtime resident of Fraser, died peacefully under the care of Hospice and was received into the loving arms of Jesus and husband David in Heaven on Saturday afternoon in Shelby Twp. She was 80 years of age.

Kathleen ... Read More
Kathleen Fisette, a longtime resident of Fraser, died peacefully under the care of Hospice and was received into the loving arms of Jesus and husband David in Heaven on Saturday afternoon in Shelby Twp. She was 80 years of age.

Kathleen was born Mary Kathleen on May 10, 1939, the daughter of the late Richard and Dorothy Ann (Murphy) Johnston. She was united in marriage to David Fisette in December of 1979 in St. Paul United Church of Christ in Warren. The couple made their home in Fraser beginning in November of 1980. She and her late husband David enjoyed Square Dancing for over 25 years, traveling all over the country together. Kathleen was retired from General Motors in June of 1992 where she had worked for over 45 years as a supervisor in the Patten Section. She was a very loving and caring person who will be deeply missed by all who knew and loved her.

Kathleen is survived by her step children, Jeffrey (Nancy) and Marc (Francie) Fisette; her brother Richard (Marie) Johnston and grandchildren, Samantha (Aaron) Stenger, Alec, Zoie, Counrtney, Alyssa, and Rachael; great grandchildren, Rylie and Troy. She was preceded in death by her beloved husband, David on June 11, 2017.

Visitation will be held on Saturday, January 4, 2020 at Hope United Church of Christ, 35127 Garfield Rd., Clinton Twp.from 12pm until time of funeral service at 1pm. Burial will be with her husband at Great Lakes National Cemetery, Holly at a later time. Share memories with the family at www.faulamannwalsh.com
Read Less

To send flowers to the family or plant a tree in memory of Kathleen Fisette, please visit our Heartfelt Sympathies Store.

We encourage you to share your most beloved memories of Kathleen Fisette here, so that the family and other loved ones can always see it. You can upload cherished photographs, or share your favorite stories, and can even comment on those shared by others.

Posted Jan 05, 2020 at 01:57pm
Kathy, was funny and kind....a great personality....I really enjoyed her company while doing her hair at our salon in the city of warren. When she moved and went into assisted living with her husband David..I really missed her. May she rest in peace....The lords blessings to her always. ...Diane Dicristfaro Fowlds
Comment Share
Share via:
PS

Posted Dec 19, 2019 at 12:55pm
I remember many time square dancing with Kathleen and David. They were such a fun loving couple. Sympathy to the family.
Comment Share
Share via: 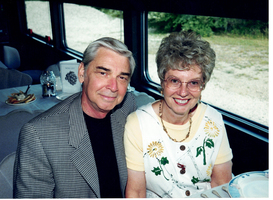