To share your memory on the wall of Ronald Jurkiewicz, sign in using one of the following options:

Print
Ronald E. Jurkiewicz, a resident of Sterling Hts., was received into the loving arms of Jesus and his loving wife, Kathleen early Sunday morning under the care of hospice. He was 85 years of age.

Ronald was born in Pittsburgh, Pennsylvan... Read More
Ronald E. Jurkiewicz, a resident of Sterling Hts., was received into the loving arms of Jesus and his loving wife, Kathleen early Sunday morning under the care of hospice. He was 85 years of age.

Ronald was born in Pittsburgh, Pennsylvania on August 11, 1934 the son of Joh and Anne (Wiznicki) Junkiewicz. He was united in marriage to his loving wife, Kathleen Susan Melenik on April 2, 1959 and honeymooned at Niagara Falls, New York. The couple made their first home in Roseville, moving to East Detroit in 1965. They made their home in Sterling Hts. in 2005. Ronald drove truck fro the Bender & Loudon Company for years hauling Acid and later for the A.B.F. Company fro over 34 years retiring in 1998. He was a loyal member of the Teamsters Union. Ronald loved gardening, the outdoors, and especially woodworking, building things like doll houses, carts. hobby horses, display stands and other things for the family. He also enjoyed cooking for the family. A very loving and caring person, he will be deeply missed by all who knew and loved him.

Ronald is survived by his loving children, Paula and Michael (Kimberly) Jurkiewicz and by his adoring grandchildren, Jacob Daniel and Hannah Marie. He was preceded in death by his loving wife, Kathleen on January 20, 2015,

Plant a Tree in Memory of Ronald
Plant a tree 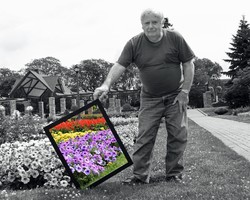