To share your memory on the wall of Ronnie Chapman, sign in using one of the following options:

Print
Ronnie E. Chapman Sr., longtime resident of Roseville, died peacefully in his sleep on May 2, 2020. He was 76 years of age.

Ronnie was born on December 18, 1943 in Jacksboro, Tennessee, one of seven children to the late Elmer and Euld... Read More
Ronnie E. Chapman Sr., longtime resident of Roseville, died peacefully in his sleep on May 2, 2020. He was 76 years of age.

Ronnie was born on December 18, 1943 in Jacksboro, Tennessee, one of seven children to the late Elmer and Euldene (Hatfield) Chapman. He was a 1961 graduate of Lincoln High School of Warren, where he was known as the "News Reporter." Ronnie was united in marriage to his beautiful wife, Martha Jane Taylor, on June 25, 1966 in Warren, Michigan. The couple lived in Warren until moving to Roseville in 1971. He worked many years for Square D Electric of Madison Heights and retired in 2008 from Freeman Manufacturing of Roseville after 24 years of dedicated service.

Ronnie was known as the "Mayor" of his neighborhood. From Gratiot Avenue to Beaconsfield everyone knew his name and was the beacon of hope to his community. He enjoyed being out of the house everyday, woodworking or tending to his garden. Ronnie always looked forward to his fishing trips with his wife on Henderson Lake in Lupton, Michigan. He also enjoyed Hunting and was quite the Antique Collector. Ronnie will always be known for his gift of social networking, his value of friendship, his kindred spirit and his words of wisdom. He loved his family dearly and will be greatly missed by all who knew and loved him. His light will continue to glow in our hearts forever.

Visitation will be held at Faulmann &Walsh Golden Rule Funeral Home, 32814 Utica Road, Wednesday from 4pm - 7pm; this will be open to everyone, we ask that you remain in your cars until the Funeral Director invites you in and asking that we spend only 15 mins per visit. A private funeral will take place on Thursday and burial will follow in White Chapel Cemetery, Troy, Michigan. In lieu of flowers, memorial contributions to the American Diabetes Association appreciated. Share memories at www.faulmannwalsh.com
Read Less

To send flowers to the family or plant a tree in memory of Ronnie Eugene Chapman Sr., please visit our Heartfelt Sympathies Store.

We encourage you to share your most beloved memories of Ronnie here, so that the family and other loved ones can always see it. You can upload cherished photographs, or share your favorite stories, and can even comment on those shared by others.

Posted May 06, 2020 at 11:27am
We are so sorry to hear about Ronnie. We were Roseville neighbors for over 25 years living across the street from each other. Our kids grew up together. We shared many backyard get togethers. Ron was always willing to help whenever we needed him. If I was out shoveling snow he would always come across the street to help me. He was one of the most friendly and caring people I ever met. Always had a kind word for everyone. Whenever they had a party they would park cars in our driveway and we would park in their driveway when we had a party. Halloween was the most fun. Ron and Martha always had the best Halloween display of anyone in the neighborhood. He will be greatly missed. Hope all your special memories help during this most difficult time. Please accept our condolences Ronnie, Richard and your families. May God Bless You. Ted and Linda Barbret
Comment Share
Share via:
BW

Posted May 04, 2020 at 09:50pm
We will sure miss Ronnie the Bull. Many special memories. Our love to the boys and their families. Ben and Wanda Walker
Comment Share
Share via:
SG

My name is Sandra Graham. I am a friend of Dan Hodgson. Dan visited Mr. Chapman on a regular basis and I had the privilege to accompany him a few times. Please accept my deepest sympathy. Death is the enemy of us all. But John 5:28,29 show there is hope of seeing our loved ones again. So sorry for your loss. 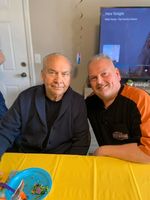 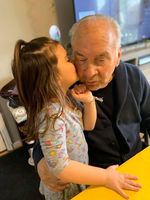 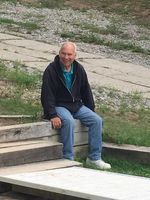