To share your memory on the wall of Robert Craven, sign in using one of the following options:

Print
Robert W. Craven, A longtime resident of the City of Fraser, passed away peacefully on Thursday, December 31st, 2020. Robert was 85 years old.

Robert was born January 18th, 1935 to the late Marvel and Ruth (nee Frankfurth) Craven in Detr... Read More
Robert W. Craven, A longtime resident of the City of Fraser, passed away peacefully on Thursday, December 31st, 2020. Robert was 85 years old.

Robert was born January 18th, 1935 to the late Marvel and Ruth (nee Frankfurth) Craven in Detroit Michigan. He was united in marriage to his beloved wife Lois Johns on July 23rd, 1954.

During World War II, Robert volunteered to give his German Shepard to the U.S. Army to help in the fight. Upon the war's ending, Robert was reunited with his dog. An article was printed in the Detroit newspapers in celebration of them getting back together.

Robert attended Southeastern High School in Detroit where he swam on the varsity swim team.

Upon completion of high school, Robert enlisted in the United States Navy, where he served as an Electrician Apprentice for four years. Robert earned a Good Conduct Medal, Navy Occupation Service Medal, and a National Defence Service Medal. He was very proud of his time in the Navy. He would talk of his service time and the places he had seen. When granted leave, he would hitchhike from Norfolk, Virginia back to Detroit to visit with his wife and family.

Robert worked at a few different companies after the service before being hired by Detroit Edison in July of 1962. For the next 32 years he worked as a serviceman going into customer’s homes repairing electric stoves, dryers, and water heaters. He also did in home troubleshooting of electrical problems and replaced blown fuses and defective circuit breakers. He worked during some of the biggest storms the company had faced protecting the public from downed wires, and reconnecting service drops to homes that were torn down by trees and other debris. Robert retired from Detroit Edison in 1994.

Robert developed a love for the outdoors, and knew he wanted to share this love with his family. In 1965, while one of his very first archery hunts, he was able to take a very impressive 9 point buck. Word of this buck traveled, and soon thereafter, he was contacted for a picture of the buck which made the front page of The Roscommon Herald-News. He would continue to hunt deer every year for the next 45+ years.

Robert’s other great love was fishing. He fished in different areas of Michigan for several different species of fish and enjoyed them all. Robert would spend the majority of his fishing time on the waters of Lake St. Clair in pursuit of walleye. He would hand tie his own crawler harnesses and fish whenever he could. He enjoyed having his family over for big fish dinners after the catch. He would also ice fish on the lake, and pursue trout and salmon on the St. Clair River.

This passion for the outdoors was shared with his sons. Robert would take his boys along on these adventures and give them the incredible opportunity to see and feel nature. This passion for the outdoors still burns brightly in each one of his sons.
Robert was the beloved husband of the late Lois. He is survived by his sons Kevin (Lynn), Keith, and Kurt (Cheryl). He was the Grandfather of Amanda Bower (Tommy), Kevin Jr., Monica Orzel (Ian), Sarah (Ana), Alex, and Jessica. He was Great Grandfather to Piper Bower and Miles Orzel. He is also survived by his brother Richard.

The family will be holding a private burial service and celebration of his life.
Read Less

To send flowers to the family or plant a tree in memory of Robert Wellington Craven, please visit our Heartfelt Sympathies Store.

There are no events scheduled. You can still show your support by sending flowers directly to the family, or planting a memorial tree in memory of Robert Wellington Craven.
Visit the Heartfelt Sympathies Store

Posted Feb 03, 2021 at 11:52am
Kevin and family- we hope the memory of your dad lives on through this tree and all the outdoor activities you enjoy while remembering him.

Posted Jan 07, 2021 at 04:57am
With deepest sympathy from Supply Chain Management leadership of DTE Energy. 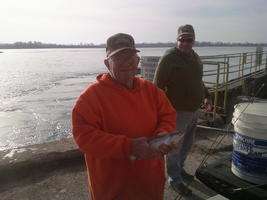