To share your memory on the wall of Margaret Greene, sign in using one of the following options:

Margaret was boron on October 16,1930 in Jersey City, New Jersey, the eldest of four children, to the late James Joseph Soldi and the late Edith DeCecco Soldi.

In October of 1953, Margaret married Robert Greene in Jersey City, New Jersey. They took up residence in the Bronx. where the three elder of their four sons were born. They later moved to Richmond Hill, Queens, where their youngest son was born. After Robert's death on March 12. 1986, Margaret continued to live in Richmond Hill where she resided until moving to Michigan in March of 2018.

Her professional life included J.W. May's Department Store as a salesclerk in the gift department; and a switch board operator for Bear Stearns Financial Institution, until her retirement in 2008.

Margaret enjoyed Hollywood gossip magazines and could tell anyone about the "who's who" and who was doing what in tinsel town! She love Law and Order; and saw every episode several times. She loved makeup and jewelry. She also enjoyed "hanging out" with her best friend, Gale, going on outings with her senior group from her apartment building, and cheering for her grandchildren at many of their school and athletic events.

Margaret had an infectious laugh, a quick wit and never left the house without looking her best!

Margaret is predeceased by her parents, James and Edith; her brothers, Sonny and Teddy; her husband, Robert; and her beloved son, Robert (Bobby) Greene.

She is survived by her bother, Vinny; her sons, Martin, Anthony (Mellissa) and Terence (Carol); her grandchildren, London, Declan, Bryton and Cullen; brothers and sisters in law,many cousins, nieces, nephews and friends.

To send flowers to the family or plant a tree in memory of Margaret Mary Greene (Soldi), please visit our Heartfelt Sympathies Store.

We encourage you to share your most beloved memories of Margaret here, so that the family and other loved ones can always see it. You can upload cherished photographs, or share your favorite stories, and can even comment on those shared by others. 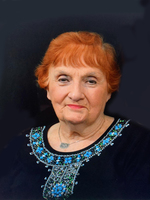