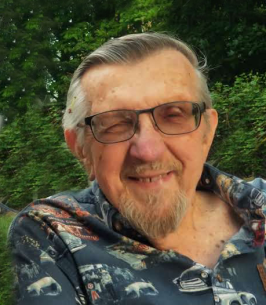 David Joseph Wendt, longtime resident of Eastpointe, died peacefully surrounded by the love of his family on May 29, 2022. He was 81 years of age. He had several health challenges, and fought a courageous battle over the last two years, but has now won the victory and is with his Lord and Savior.

David’s journey in this life began on October 27, 1940, in Detroit, Michigan, son of the late Joseph and Ruth (Wilson) Wendt. He was a proud 1958 graduate of Roosevelt Military Academy l of Aledo, Illinois and attended Eastern Michigan University. David, met the woman of his dreams, Linda Schultz, and he asked her hand in marriage. The couple wed on May 25, 1963, at the Church of God Tabernacle Church in Detroit. The couple made their home initially in Detroit, and then moved to East Detroit their union was blessed with two wonderful children of whom he loved and cherished. David had a successful career as an Executive Banker and Vice President of Michigan National Bank for 25 years. After his retirement, he had a nice second chapter of work at Midwest Brake for many years.


To know David was to love him. He was a Godly man who lived life with love and purpose. David was a man of honesty and integrity. He was also quite the storyteller and would have everyone captured with his knowledge. David loved and appreciated anything vintage and antique. He was a collector of many different things and was an avid car and truck enthusiast. David absolutely loved the 50’s, when life was fun and simple, and he always continues to live that life. He loved his Eastpointe community and belonged to the East Detroit Historic Society and the Library Board. David was a passionate reader and the wealth of knowledge he possessed about everything from history and cars to travel and music made him appear to be like a walking encyclopedia. He was proud to be an American and was always patriotic.

Above all, David was a family man who was all about God and his family first. He supported many non-profit ministries and volunteered in various capacities in his church. He loved his grandchildren and treasured the moments shared in their company. He will be greatly missed, and his light will continue to glow in our hearts forever.

David is the loving and devoted husband of 59 years to Linda; dearest father of Lisa (Henry) Mares and Jeffrey David (Amy) Wendt; cherished “GP”(David's chosen name for grandpa) of Nicholas, Justin and Jonathan Mares, Morgan (Jonathon) Winter, Melanie and Madison Wendt; adored great grandfather of Jayce Winter; and his baby brother on the way: dear brother of Mary Catherine (the late Harold) Wennerstrom, Elizabeth Anne (the late John) Moore, and the late Eleanor (Gerald) Yutzi and the late Richard Joseph (Beryl) Wendt; and beloved uncle to many nieces and nephews.

Visitation will be held at Faulmann & Walsh Golden Rule Funeral Home, 32814 Utica Road, Fraser, Michigan, Saturday, June 4, 2022, 12noon until the time of funeral service at 2pm. To honor David and his commitment to help others, the family requests in lieu of flowers, that donations be made to Samaritans Purse to help those in the Ukraine. Share memories with family at www.faulmannwalsh.com