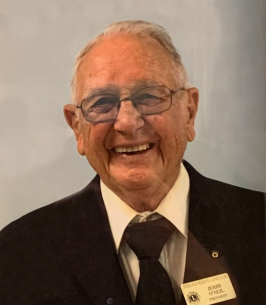 Gerald Leslie O’Neil, a resident of Fraser since 1960, passed away peacefully on Tuesday, June 7, 2022 at Waltonwood Lakeside. He was 93 years old.

Gerald was born on February 27, 1929 in Highland Park, Illinois to Leslie and Katheryn (nee Obermeyer) O’Neil. After completing high school, Gerald enlisted in the United States Army and served his country honorably in intelligence during the Korean War. He was united in marriage to his beloved wife, Phyllis Ileen Jost on October 11, 1958 after they met at the University of Wisconsin. Gerald began his career at the State Bank of Fraser before working for over 25 years for Chrysler Financial, retiring in 1991. After Phyllis’ passing, he met and later married his beloved wife Anne Marie Vivian on February 14, 1999. Outside of his work he enjoyed being an active member in the Elks Troy-Clawson #2169, serving as president of the Lions Club of Sterling Heights, stock market trading, traveling, going on cruises, and spending time with his family. He will be deeply missed by all who knew and loved him.

Visitation will be held on Thursday, June 9, 2022 from 4-7pm with a funeral service at 7pm at the Faulmann & Walsh Golden Rule Funeral Home, 321814 Utica Road, Fraser, Michigan 48026. Private interment at Fort Custer National Cemetery. Memorial contributions may be addressed to the Lions Club of Sterling Heights.